Combat in Sengoku Asuka ZERO is mostly real-time and takes place mostly automatically, but the regent does play some role.

Every warrior has their own EX skill and an EX gauge that fills as a battle progresses. Once filled, the regent can order a warrior to immediately execute her EX skill by tapping her panel in the lower right. During performance of an EX skill, all other action in the battle ceases until execution is complete.

An EX skill can be enhanced by turning it into a combo. Executing a combo is then as simple as activating an EX skill and then quickly tapping the panel of one or more other warriors who have a full EX gauge.

All warriors belong to a specific element: Fire, Water, Wood, Light or Dark. 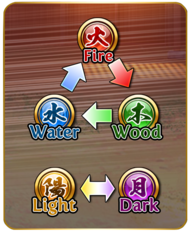 Each element deals more damage to one element and receives reduced damage from the another.

If the damage of an attack is fixed, there will be no increase or reduction (regardless of elemental affiliation).

There are a number of status conditions that warriors and their foes may be afflicted with: